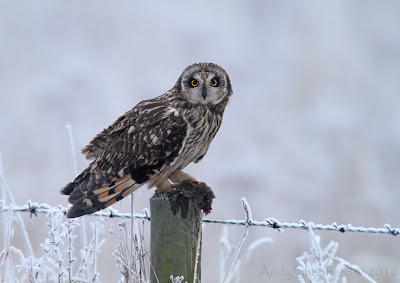 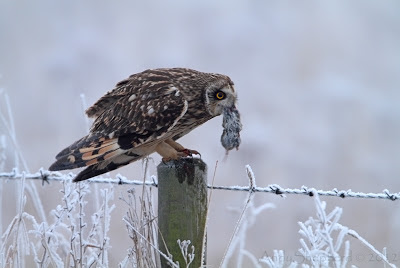 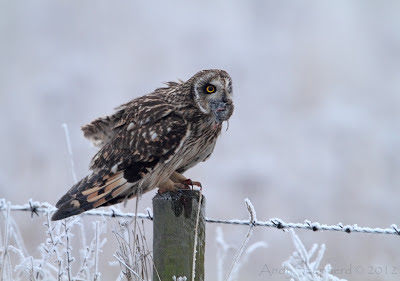 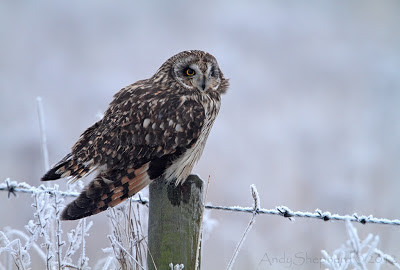 An early start led to a superb encounter with this gorgeous owl, The day
started with me scraping the ice off the car at 06.00, it was -6 degrees
and I was beginning to have second thoughts about making the trip as my
hands were freezing, but after a little griping I was off and on my way.

I arrived on site at about 08.00 and was pleased to find a slight increase
in temperature, it was only -5 degrees, but all you could see were copious
amounts of freezing fog, which doesn't make for ideal conditions for
photography, but I decided to stick it out and waited to see if any owls
came out early. After waiting for over an hour and a half this gorgeous
Short-eared Owl came within range and I managed a few shots.

I am very pleased with the shots, especially the ones of the owl eating
the vole, I know a guy who's been waiting for over 3 years to bag a shot
of a Shortie with a vole, so it just goes to show that an early start might pay
off after all.

Until next time, thanks for dropping by.

Andy Shepherd
Welcome to my Blog, I'm a amateur wildlife photographer from West Yorkshire, I hope you enjoy my images and there should be more to follow soon. All the feathers and fur on this blog are wild creatures, I don't photograph captive subjects.

Press f11 for a full screen view, and then click on the image to view the large version.